Hotshot pilot Nax Hall has a history of making poor life choices. So it’s not exactly a surprise when he’s kicked out of the elite Ellis Station Academy in less than twenty-four hours.

But Nax’s one-way trip back to Earth is cut short when a terrorist group attacks the Academy. Nax and three other washouts escape—barely—but they’re also the sole witnesses to the biggest crime in the history of space colonization. And the perfect scapegoats.

On the run and framed for atrocities they didn’t commit, Nax and his fellow failures execute a dangerous heist to spread the truth about what happened at the Academy.

They may not be “Academy material,” and they may not get along, but they’re the only ones left to step up and fight.

Thank you to Harper Collins for providing me with a copy of The Disasters in exchange for an honest review.

This book was just SO MUCH FUN.  The characters were funny, diverse and had great banter.  The world building was fantastic and the story just felt like a big adventurous ride.  It wasn’t particularly deep and meaningful but it was brilliantly entertaining, and sometimes that’s exactly what I want a book to be.

Our main character, Nax is relatable and amusing in that slightly dorky way.  After being rejected by the academy he’s waited his whole life to get in to, he’s preparing to make his way home, with a few other flunked academy hopefuls, when they witness the academy being attacked by a terrorist group.  Barely managing to escape, they flee to another planet with the intention of alerting earth to what has happened.  But they soon discover it’s not that simple, and they have been blamed for the attack.  As they try to stay out of the hands of the authorities, and stay alive, they find the academy attack was only the beginning, and now it’s up to them to try and unravel a plot that threatens to destroy too many lives.

I loved watching the way the different characters dealt with the fear and anxiety of the situations they were thrown in to and the friendships that developed from ‘strangers on a ship’ to ‘we’ve been through it all together’.  The writing was fast paced and the action was non-stop!

This was  such a great debut novel for M.K. England and it left me wishing there was going to be a sequel.  I wasn’t ready to say goodbye to these characters, especially Nax and Rion! 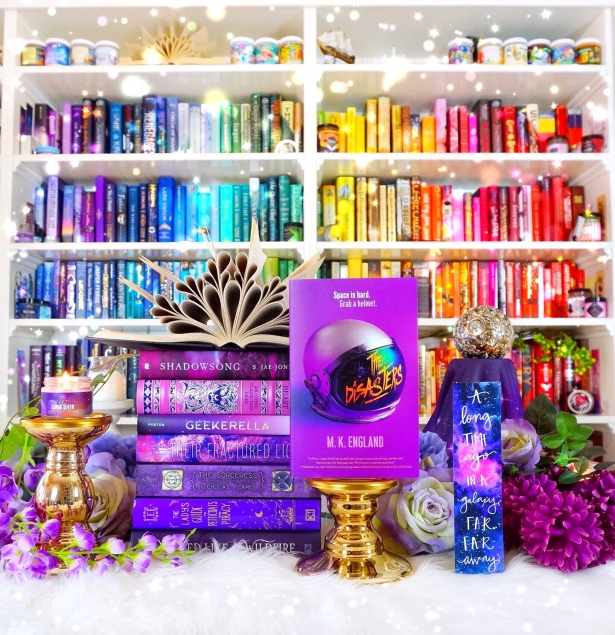 2 thoughts on “The Disasters by M.K. England – ARC Review”