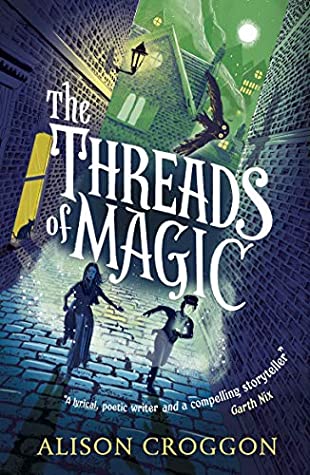 Pip lives on his wits in the city of Clarel. When he pickpockets the wrong man, he finds himself in possession of a strange object – a heart in a silver casket. What’s more, the heart seems to be trying to communicate with Pip, and the royal officials who lost it will stop at nothing to get it back.

Pip has unwittingly broken an ancient spell, and his theft will have far-reaching consequences for the whole city. As the ancient war between the Spectres and witches of Clarel reignites, the heart prepares to seek revenge for all it has suffered…

Thank you so much to Walker Books for sending me a copy of The Threads of Magic in exchange for an honest review!

Pip and his sister are living hand to mouth on whatever Pip can steal.  When he manages to scoop up a strange, but expensive looking box, he’s convinced their financial woes are over.  When the pair open the box though, there’s just a strange, shrivelled black lump inside, that looks kind of like an old heart.  Pip’s sister is convinced the heart is evil and demands Pip get rid of it immediately, but Pip feels like the heart is almost alive, and he can hear it talking to him…  As it becomes clear the men who lost the heart are some of the most powerful men in the kingdom, Pip and his sister have to do everything they can to avoid being caught.

This is one of those middle grade books that is probably more suited to older middle grade to YA readers.  It had a middle grade vibe, but the subject matter was a little heavier than most middle grade books.  Full of forbidden magic, witches and sinister plots, The Threads of Magic skilfully weaves a story where you’re never quite sure who is in the wrong.  I loved the way the narrative shifted between several of the characters points of view, it felt like we got to know each and every characters’ intentions and personality so well.  With plenty of morally grey characters and themes revolving around what true friendship and kindness should look like, this was a spellbinding read I enjoyed immensely.