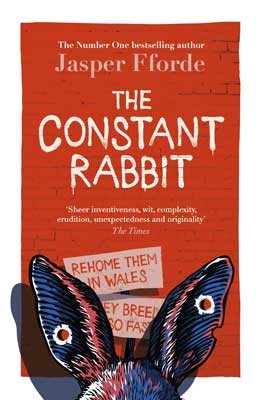 My Rating ~ Four & a Half Stars

Peter Knox lives quietly in one of those small country villages that’s up for the Village Garden of the Year award. Until Doc and Constance Rabbit move in next door, upsetting the locals (many of them members of governing political party United Kingdom Against Rabbit Population), complicating Peter’s job as a Rabbit Spotter, and forcing him to take a stand, moving from unconscious leporiphobe to active supporter of the UK’s amiable and peaceful population of anthropomorphised rabbits.

Thank you so much to Hachette Australia for providing me with a copy of The Constant Rabbit, in exchange for an honest review!

After the Event many years ago, where certain animals were suddenly anthropomorphised and became ‘part of the human world’, rabbits in particular are seen at best as pesky, and at worst, dangerous creatures set on taking over the world with their large litter sizes and foundation ruining burrowing natures.  Peter works for an organisation as a ‘spotter’, someone who can tell the rabbits apart – something not many humans can do.  He was good friends with a rabbit in his university days, and is surprised to run in to her at the local library.  When she moves in next door, his office expect him to run the family out of town.  Or else.

Jasper Fforde is about the cleverest writer I’ve ever come across.  His way of presenting topics in such a unique and witty way never fails to impress me.  The Constant Rabbit is a book written for the current times.  You might find yourself nodding along, knowing exactly how bizarre the prejudices in our society really are, when you see rabbits on the receiving end.  If not, you should be.  As with all of Mr Fforde’s stories, The Constant Rabbit is both absurd and makes complete sense at the same time.  The first part of the book took a while to get my head around and understand exactly what was going on, but the rest of the story flowed smoothly and I was completely immersed in the quirky tale.  Although some of Jasper’s trademark humour was included, this book felt a little darker and more serious than his others, but it suited the narrative perfectly.

Tackling racism, privilege and the all too real bystander mentality, The Constant Rabbit unashamedly points it’s finger directly at the reality of our current world in a truly original way.  Highly recommend grabbing yourself a copy!

1 thought on “The Constant Rabbit by Jasper Fforde – ARC Review”