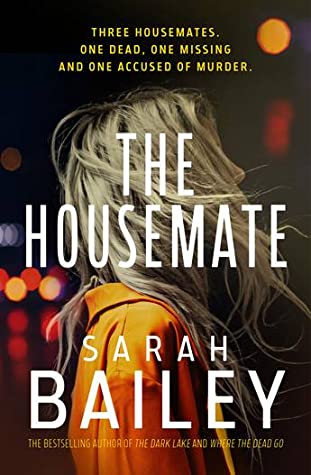 Three housemates.
One dead, one missing and one accused of murder.

Dubbed the Housemate Homicide, it’s a mystery that has baffled Australians for almost a decade.

Melbourne-based journalist Olive Groves worked on the story as a junior reporter and became obsessed by the case. Now, nine years later, the missing housemate turns up dead on a remote property. Oli is once again assigned to the story, this time reluctantly paired with precocious millennial podcaster Cooper Ng.

As Oli and Cooper unearth new facts about the three housemates, a dark web of secrets is uncovered. The revelations catapult Oli back to the death of the first housemate, forcing her to confront past traumas and insecurities that have risen to the surface again.

What really happened between the three housemates that night? Will Oli’s relentless search for the murderer put her new family in danger? And could her suspicion that the truth lies closer to home threaten her happiness and even her sanity?

Thank you so much to Allen & Unwin for sending me a copy of this book, in exchange for an honest review!

Oli is a reporter and she’s there the day the police lead a girl away from a house she shares with her two housemates. One of them is dead and one is now missing. The remaining girl is sent to prison for murder.  Ten years later, events unfold that bring “The Housemate Case” back into the spotlight. Oli is put back on the case, but this time she’s paired up with a young up and coming podcast reporter, much to her annoyance. Oli has always been a print reporter and would prefer it stayed that way. As they try to investigate the case at breakneck speed, it becomes about more than just getting the scoop.

After a slightly slow start, The housemate grabbed me and I was addicted! Combining police, investigative journalism, family drama and more than just one mystery, the story pieced itself together like a particularly satisfying jigsaw puzzle. I often didn’t particularly like our main character. She was inflexible and downright rude towards her podcast partner for much of the book and had some rather questionable morals, but her hard headed way of dealing with the news, and getting to the truth, won me over in the end!

This one was a wonderful detective story, with interesting characters and a mystery I never fully unraveled until the end.